HomeBlogThe HSS and the TURTLE SMART

The HSS and the TURTLE SMART

The flash, the curtains, and the speed- let`s talk about the challenges of High-Speed Sync!

We are always opened to new ideas. Many of our customers asked about the HSS (High-Speed Sync) mode, they wanted to know if it would work with the TURTLE SMART flash triggers. The easy answer: our underwater LED trigger can handle it! For the TURTLE it's not a challenge, only an adjustment in the software. The problem is the special flash, as many of the underwater strobes aren't capable of producing it.

A few words about the flash burst

Let's start with the basics!
The ordinary flash burst is very similar to a shark's fin. The flash intensity is brightest just after the flash is triggered and then generally decreases as shown in the curves below. A typical flash unit consists of a storage capacitor, a charging circuit, and a trigger circuit. The discharge of the tube is initiated with the high voltage generated via a trigger transformer, the IGBT device controls the power output. At power levels lower than full power, the IGBT shuts off the tube before the capacitors in the flash have emitted all their power. In the charts below, you can see the cut off and the fully discharged tube's flash.

The pre-flash, the duration is about 20-40 microseconds

The fully discharged flash, the duration is appr. 3-4 milliseconds 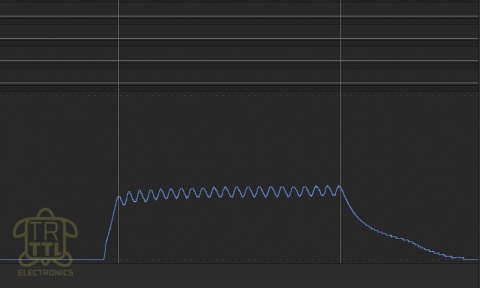 3 The graph of an HSS flash, only the Retra Pro is capable to produce this

How the curtain works

DSLR cameras use a focal plane shutter: it consists of two curtains that travel from top to bottom that open to reveal the sensor. The longer the shutter speed is, the more time it takes for the curtains to travel down the sensor. You need to know your camera's flash synchronization speed, which can be 1/250 seconds or in some cameras 1/160, etc. The travel of the curtain can't be faster because of technical reasons. If your strobe isn't capable of HSS flash, it's the limit for you to use a strobe.

To understand what happens during an ordinary (not HSS) flash burst just look at this picture!
We indicated the timing of the flash when you use the first or second curtain sync. With slow shutter speeds, the flash can be fired at two points: directly when the first curtain has completed travel or just before the rear curtain starts to move. Any of them light the subject, as the sensor is fully exposed, so the exposure will be correct.

The flash can be longer or shorter, it doesn't matter as it lights the subject with the power output we set, regardless if its duration is 40 or 4000 microseconds.

As we wrote, high-speed sync sends several pulses of lower intensity light as the curtains travel across the focal plane, instead of the usual big burst an ordinary strobe makes. In the photos below you can see as the curtains travel for a duration of 10 milliseconds. To shoot a photo with strobe the duration of the flash should be the same! The exposure depends on the distance between the curtains. The majority of the underwater strobes simply aren't capable of producing this kind of pulses of light. These don't work in HSS mode.

The TURTLE SMART triggers in the webshop

€362.00 Including TAXAdd to basket
© Trt-Electronicsrlnd.hu